My beloved mother passed away five years ago today. She spent the last two and a half years fighting for her life against breast cancer and her body was destroyed in the process. It was an ugly battle, but at least she was given a peaceful end. There was no pain or fear as she was carried away while she slept with her son watching over her. It was supposed to be my night with her, but he really wanted to stay that night. I’m morbidly jealous not to have been with her at the very end, but also grateful to have gotten caught up on sleep. It was a wrenching and traumatizing day as I tried to comfort the kids and family, helped finalize her pre-planned funeral arrangements, cleared out her room and contacted family members. Praise Baby Jesus for Chooch, is how I can best sum it up the months before and after her passing.

Today I honor the memory of her life, but to be honest it’s easier to do on her birthday. I frequently get flashes of the ugly stuff, but not as frequent as it used to be. I’ve forgotten some of the finer details, which I’m grateful for and don’t explore. Some things are better off forgotten, after all, especially since I was her primary caretaker for the last five months of her life. Ugly stuff that can’t be unseen, but is finally starting to fade.

It’s hard watching someone you love so much waste away slowly. The only good thing about having as much time as we did with it looming was that there was no “unfinished business” left behind to haunt us. She adored and was adored. Friends, family, co-workers and neighbors all came together for her and she knew it. There is only peace and love surrounding her memory, and for that I’m grateful as she certainly deserves such an honor.

Much in the same way I took back my anniversary in November, I’m taking back today as well. I will not “grieve” in the traditional sense. Five years is long enough for that, as I know she would tell me. Instead, I’m taking this as a Day of Power. I’m challenging myself to do something that I’ve been afraid of doing, for my own personal reasons. It will take bravery and confidence, two things I traditionally lack but I’m trying hard not to let that stop me. And as I look back at how much my life has changed since she started looking over me in a different way, I know she’s proud of me. Proud of the bravery I’ve demonstrated, the positive changes I’ve made, and the woman I was and am evolving into.

I take my inspiration from this photo of my mother from the day of her high school graduation. I never saw this photo while she was alive to ask about it, but to me she’s embracing her future as a woman of power. She certainly did her best to raise me as one. I’m slower to it than she was, but I’m getting there. 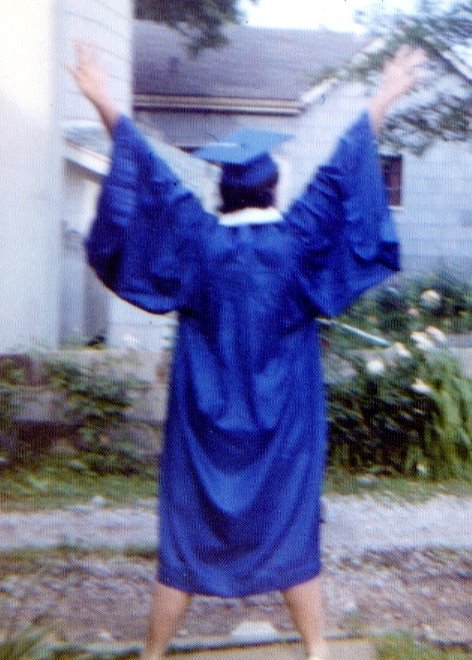