Edit: Written on March 24th, this has languished in my drafts folder. Here it is, stale, mostly unedited and, for me at least, sparkly.

Sorry, Dear Reader, for the delay in posts, but it has been the most exciting/chaotic 2 weeks in the last several years.

First, we sold our house. And it was excruciating up until the moment the buyers signed off, over half an hour into settlement. I’m in the process of deciding whether or not to post some writings I have done along the way, but suffice it to say it stressful.

Second, there has been a blur of time spent in the company of some of my favorite people on the planet, lots of music by my favorite band and more laughter than is good for a throat, if current feel is any kind of a judge.

I was feeling particularly emboldened when I made plans on Thursday to do something completely out of my comfort zone on Friday. And I was anxious, and panicky, but necessity made me strong enough to follow through, thank goodness(?).   I had some particularly strong joint pain, persistent dizziness (I did not take medication as it makes me sleep. Enough sleeping!), nausea and my now-almost-constant fatigue from the pain. I soldiered on, Robot Girl style. *beep*bop*boop*

I had no idea that immediately following attainment of much need help for Chooch’s slumber (blog post, Chooch?), plans would change in such a way as resulting in what was already destined to be a successful and fun day, into a magical, healing and nurturing day. I did not expect such peace and tranquility amongst unfamiliar new friends. I was out in nature, and this was bold because we found yet another tick on me a week or so ago. I’ve eschewed nature since the RMSF diagnosis, deeming it Highly Hazardous to me.

But I ended up in this serene and beatific wooded and landscaped spot in heaven and rejoiced in the choices I made that led me to that afternoon of giggling, beautiful young girls (aka fairies) dancing and playing with flowers and leaves, pausing briefly to study a water fountain as they seek twigs and branches for the bonfire.

And to think, I almost chickened out of what ended up being a once in a lifetime afternoon. 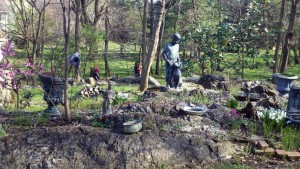