Waiting for a nerve in my neck to un-pinch and half a dozen hot spots to simmer down enough to get a shower. Especially my hands. #IAmAlive!

As soon as I hit send, I have an image and a conversation pop into my mind from errands with my son T (formerly LT).

We were clearing up his confusion about my health issues. What I have and what it means. Why I don’t have a cure that lets me return to ‘normal’ life. Fun stuff like that, but with the extra sting that comes from knowing you’re talking with someone attuned to the plights of others.

I had just finished explaining as we pulled into my parking space and hung my handicap placard from the rearview mirror.  I had just gotten to the part where I offer honest comfort — Yes, I have daily pain and I rarely get a total break from it. Yes, it’s maddening (Psychologically, to be clear. Anger worsens ALL THE THINGS, so I never linger there.). But it’s not cancer, it’s not going to kill me and it’s a hell of a lot luckier than some people have it.

His 16 year old mind was grappling and processing the concepts: anger that my diagnoses are what I call ‘diagnosis by default’; fear and concern at my pain levels; and I have no idea what else might have been going on in his head, as his face was a mask of compassion and worry. I reassured him as best I could that my doctors are vigilant and made sure he understands the scariest stuff I might have has been repeatedly ruled out. I want him not to worry and was taking more time to explain, and struggling how to do so. But then the Universe (or God, the Flying Spaghetti Monster or Not Applicable. Reader’s choice.) made my point for me in a horrific demonstration of humility and humanity.

Just as we were crossing into the store we saw a surrealistic and utterly humbling sight: an elderly disabled woman being helped across the parking lot and into a motorized cart at our local grocery store.  She wasn’t just elderly, she was unable to stand upright. And by that, I mean there was no attempt on her part or the part of her companion to help her stand upright. It wasn’t even considered as a possibility. They were just getting to the motorized cart as quickly as possible, for her to move more comfortably. Although the elderly woman was very nearly bent into a right angle, she didn’t fall. Her skilled companion held her purse, her hand and her other arm to assist in keeping her upright.

One of the first things that smacks you in the face when going through any kind of health crisis is the stripping away of any modesty or humility, so it wasn’t embarrassment I was worried about for her. It was just the saddest thing I’ve seen in awhile, what this woman’s existence was reduced to. Especially since it seemed routine.

And then the thought that always comes, a quiet and shameful whisper in the back of my mind: Thank God that’s not me.

My son and I watched in silence as the duo made their fiercely determined way into the store. We offered assistance but was assured that they were fine and the cart was ready and waiting. We passed out of their way and a moment later, I touched my son’s arm and said, paraphrasing as I’m struggling to remember details beyond the duo.

That’s why I am grateful. I am constantly reminded, as I move about the world with my invisible disabilities, that there are others FAR more worse off than I. And she’s likely grateful that she has this instead of something worse.

So, yes, today I griped. I may tomorrow, as well. I really try not to fatigue my loved ones and delete many things unsaid, because I want to laugh and chase giggles, not revel in misery and complaints. But I’m not going to beat myself up, as everyone gripes about something in both social media and meat space.

But I do so very humbly and with immense gratitude for what it’s not.

And besides, this is my family. What else could a gal ask for? They are bad ass and I couldn’t possibly love them more. 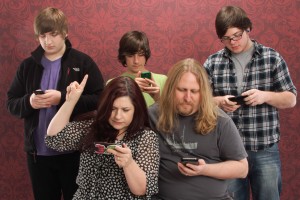