In a moment of long-planned and delayed and finally spontaneously, we blew our dinner, movie, sinful dessert and prezzie money and efforts at the last minute on Valentine’s Day matching tattoos, and then ended the day like most others, snuggled up, talking or watching TV, laughing and being goofy, like we do. Not letting a single giggle escape ungiggled. Our big and sinful dessert? Cherry pop-tarts, because we were too broke and tired to do anything else.

We had no plan going into the weekend, just plans with friends on Saturday that fizzled out and a visit to our Eldest son a few hours south on Sunday and an unexpectedly serendipitous visit with friends, the whole weekend was exceedingly awesome. As has happened frequently, we’ve found that sometimes, just when we need a spiritual boost,  the Fates or the Flying Spaghetti Monster or God or whatever you believe in make things just work out sometimes. This was proven COUNTLESS times over the weekend, as plans went silent and others sprang up, although I do wish I could have visited my sis while nearby. Greedy me.

I dunno if it was a different storm or the tail end of the insane snowstorm, dubbed Pax, but we got at least a foot of snow, which gave hubby the option to telework on Friday, VDay. As trashed as our street is after the combination of well over a foot of snow, melting and icing, and the cruelty of the snowplowing execution by those magical forces that make them hazardous to even check the mail. We got to at least spend the day in the same house, albeit in separate rooms. Close enough to sneak a smooch during a conference call, anyways.

At likely the last feasible moment, the scale was decided, the appointments made and we found ourselves excitedly slamming in a quick, standing-in-the-kitchen dinner and went out for our Valentine’s gift exchange at Inksanity in Leesburg, Virginia. We originally hoped to get them on our 10th Anniversary this past November 1st. We then hoped to get them while in Hawai’i. We kept having stuff come up and delaying it, but I have no complaints.

Chooch surprised me with romance in our ears in the car as he drove us there. He played music by Metric, “Breathing Underwater” (see previous post) first as we chatted and planned and chatted. Sadly, when we arrived at the nearby tattoo shop, the artists we selected were in different areas, so we were only very briefly together, me at the beginning of his, him at the end of mine.

We got heart containers from the Zelda games, same number of hearts, empty and filled. It’s not a clear shot of them, but you get the idea. He explains the specifics better than I. *swoon* Soul mate! 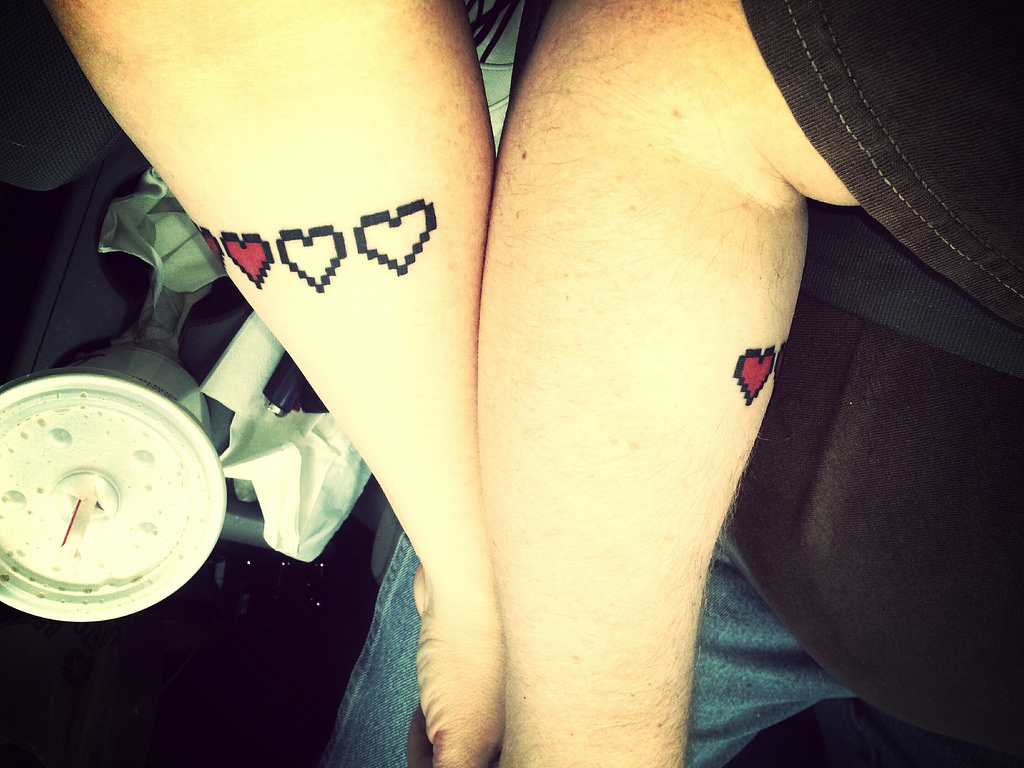 The tattoo artists worked diligently to ensure ours matched, with an apprentice seemingly floating between us doing visual checks. It was sweet how they strove for perfection and it was a great first experience for Chooch as well as for me. (Yes, it still hurts on the third tattoo, especially on the first red heart fill on, because of placement.)

We held hands and giggled on our way back through all the snow to the car, like a couple of newlywed idiots. We were so happy. It was heaven.

Then on the way home he surprised my spinning and migraine-y self (physical stress triggers my neurological symptoms, which I anticipated) with songs from our wedding CD’s. It was part of a 4-disc set of about a three hour span of music that we jointly and painstakingly made to play at our wedding reception. Each and every song was debated and ranked, it was serious stuff! And we also took our very fave 12 songs as a separate playlist as wedding favors. (I’ll never forget how adorable my stepmother-in-law was as she explained her immediate love of one of the songs, the only time I remember that anyone actually saying they’d listened. Yays!)  I haven’t loaded either playlist onto my new player yet, and now I am reminded that I really, really need to manage that mischief.

We spent more time on picking songs than anything else for our wedding, as music is an intense and shared passion of ours. And we wanted our family and friends to be surrounded by the music that symbolizes so much of who we were then, separately and together.  A little bubble of silly calm floating down the Potomac River with views of all the beauty on the moonlit night of our wedding. It was a total break from the chaos of those days. I was told by several folks that ours was the favorite wedding attended because it didn’t feel like a wedding, more like a relaxed gathering with the ceremony at the very beginning of it. Pure magic.

Listening to it on the way home from the tattoo shop, I could reflect back on how I felt on our first Valentine’s Day together, while dating, and kind of compare it to this one. We get snowed in back then, just like this year. I better appreciate how well he knows and appreciates me.  Better than anyone, yet still loves my eternally flawed self. He didn’t turn and walk away when things got tough at various points over the years.  He can even keep me calm in times of great chaos, whether it’s ours or someone else’s, using only four words. See? Magic.

Chooch is an infinitely deeper, inquisitive, creative, sexy, thoughtful and more generous dude than I previously believed possible. Like I told him the other night, I can’t even get good and pissed at him, because I know that very soon he’ll do something that will make me forget it and then I’ll feel petty for it when I’m trying to catch my breath from laughing, loving or whatever the fun entails.

I am so grateful that our unintended celebration of  lurrrrrrve evolved this way, it’s always an adventure!