Dear friend Nobilis Reed shared this photo on Facebook, with his comment, “I know too many people this applies to, alas.” 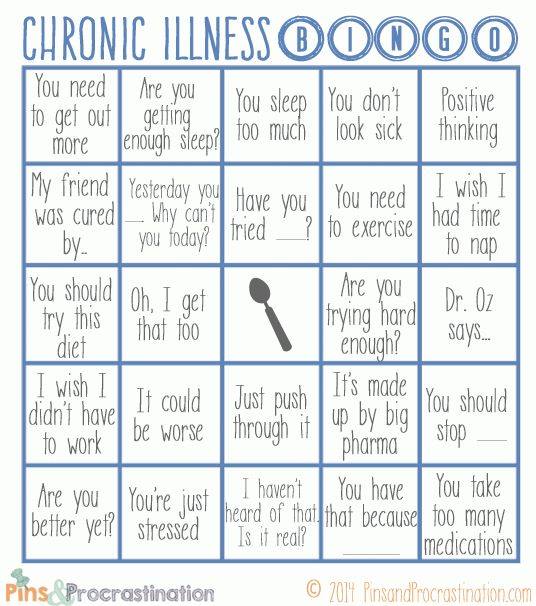 But my personal fave is missing: “Did you get a diagnosis, yet?”

I’ve had them for years. Literally. It is one month before the fifth anniversary of when my body first got down so low that I couldn’t overcome all that was wrong with me. Five fucking years. I know it’s not as long as some, but it’s been a lifetime of limitations and poor decisions based on poor assessments and lots of regrets* in those five years.

The number grows as more issues are identified. I had no idea that all the stuff I’ve been working around my whole life wasn’t normal, so I burned myself out early trying to keep up. Note: no matter what you go to a doctor with, if you are overweight, that is the first diagnoses – with the instruction to stop being fat. It took a total physical and neurological collapse, but no, fat’s not the only thing wrong here.

Maybe when folks don’t get a known answer, and how you’ll be cured of “what’s wrong with you,” and with all they have to manage in their own lives, they just don’t retain it. It just gets a little old re-explaining things to the same faces over and over, saying the same things that they clearly didn’t retain, through no intended harm at all. What doesn’t have a clear villain, doesn’t exist, maybe?

I don’t get a cure, I get chronic pain and just-as-debilitating treatments for my disabilities. (Note: I like to call them my No-Longer abilities. It reminds me that I wasn’t always broken and of a life with more usefulness.)

But I also don’t get a death sentence.

So I’m taking it as a WIN and reminding those that don’t get what’s wrong with me, that there’s something that prevents me from doing all I want to and used to do for loved ones.

It’s not you not being loved, it’s me struggling with how to show love, in current days. Just staying sane is one of my fave accomplishments to date.

*Regrets. Yes, I have them. I don’t fear them. I embrace them to learn from them. I accept them as a way to prevent foolish mistakes in the future, through blindness to my past mistakes. I dunno if it works or not, but it’s my way.

So, the point? THINK before you speak. There are no guarantees in life and I didn’t used to be disabled NOR did I have clear warning that it was coming. (I have been having doctor’s appointments for some of these issues since I was a teenager, and always told that everything was fine. Well, it wasn’t.)

My reality now is that I can’t do physical. I can’t do mental. I get ideas but cannot execute them. I struggle with finding usefulness, because others’ expectations of me are too high.

And it’s not a competition either. Everyone has stuff. This is just part of mine.