I received the heart monitor on Thursday night, but due to having mild dizziness I didn’t fire it up until Friday morning. I still had symptoms, but didn’t want to delay the start any longer. I should have started with a baseline reading, but again, the dizziness prevented that. I did provide recordings with those symptoms, and on Sunday morning was finally clear enough to send a baseline.

As you can see by the photo, it’s teensy and not cumbersome at all.  I connect the two electrodes as directed, and then plug in the monitor and clip it to my waistband. I have the wires all under my clothing, so I don’t get caught on things. 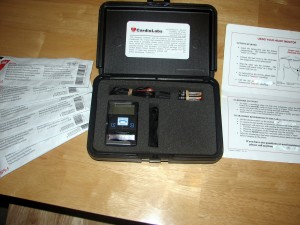 For size comparison, those are AAA batteries in the box.

Ironically, the monitor seems to be the magic cure for the dizziness since I’ve had very light or no symptoms since I attached it. At this point, I’m actually drinking caffeinated sodas at this point to try and trigger stronger dizziness. I figure I may as well try and get as much data as possible for the doctors to review, and since I’m stuck at home it doesn’t matter if my symptoms are really bad or not.

The improvement in my symptoms also leads me to believe that the first migraine medication they had prescribed for me was causing carm and providing no relief. All my symptoms were pretty severe when I was on the full dosage, and since the last week of the gradual cessation I’ve been feeling much better by comparison. The migraines themselves were so intense that I was completely debilitated. So much so that I occasionally forget that I still HAVE the symptoms and have to remind myself not to push myself too far. Again, trying to replicate that now for more hard data for the doctors.

I have an EEG on Saturday morning. We will be trying very hard to trigger symptoms for the 30 minute test. If I don’t, I will have to have electrodes cemented to my scalp for 24 hour monitoring. That cement is really itchy, just in 20 minutes. I may lose my mind if I have to do it for 24 hours…

I’m so grateful to my husband, friends and family for all the kind and supportive words and gestures. I’m embarrassed by the attention and frustrated at the reason for it, but it truly does mean so much.