How far would you go for love?

Since losing her parents at 14, young prodigy Dr. Lydia Ashley has focused on one thing: an appointment on the Deep Water Research Command Endure. Now 21, she’s about to realize that dream, but nothing is how she imagined it would be. Her transitional sponsor forgets her, her new lab is in complete chaos, and, as if that weren’t enough, she’s about to discover something so horrific it could potentially destroy all life on the planet.

Daniel Brewer, a noted playboy and genius in his own right, may be exactly what she needs… Or he may make everything worse.

Has she finally found a puzzle she can’t solve? 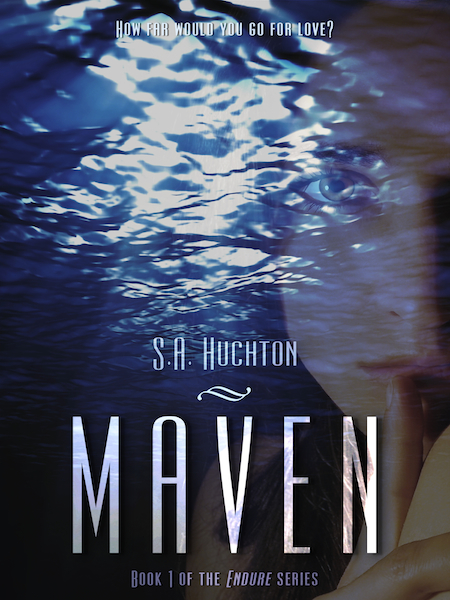 If you’re wondering why I’m taking part in a cover reveal for a SciFi Romance, blame the author, S.A. (Starla) Huchton. She is an award winning author, award nominated podcaster, graphic artist, vocalist, book designer and friend. Over the years, I have been many times impressed by her incredible talent, her strong female voice as a creator, her incredible energy and tireless work ethic.

So, while not my usual genre, I’m greatly looking forward to reading Maven, just to see what Ms. Huchton can enchant me with this time.

All you get today is the cover, but the book will be available on June 3rd, 2013.

I can’t recall if I met Ms. Huchton before or after listening to her podcast novel, The Dreamer’s Thread. But I do remember how she lured me in to listening: Cheyenne Wright. He was one of the voices she assembled for the audio production. I “met” Cheyenne through Twitter and my old podcast, The City of Heroes Podcast. Cheyenne was also a player of the superhero MMORPG, and we discovered that we also share birthdays. His voice is rich and powerful and I was curious to hear what he had lent it to. No slouch himself, Cheyenne has won no less than three Hugo Awards for his work on the web comic/graphic novels/novels over at Girl Genius.

Pretty quickly, I fell in love with the world Ms. Huchton created in The Dreamer’s Thread, characters and story. Yes, I of course loved Cheyenne’s contribution, but the story and imagery held me enraptured. I devoured it, and still recommend it to any that are interested in fantasy.

What Starla doesn’t know is that back in my 4-days-a-week running days, I would take a longer route home because I didn’t want to stop listening to her podiobook, The Dreamer’s Thread. (Yay, extra calorie burn!) And in recent months, the images Ms. Huchton brought to mind in The Dreamer’s Thread have helped me on my current quest: finding silver linings, regardless how dark the circumstances. I have even been using her descriptions of finding the “thread” in one of my guided meditations (helpful with my Health Blah related stress management).

Many thanks to Ms. Huchton for her literary and personal contributions to my life and for all she brings to the world.

Starla Huchton released her first novel, The Dreamer’s Thread, as a full cast podcast production beginning in August 2009. Her first foray went on to become a double-nominee and finalist for the 2010 Parsec Awards. Since her debut, Starla’s voice has appeared in other podcasts including The Dunesteef Audio Fiction Magazine, The Drabblecast, and Erotica a la Carte. She is also a voice talent for Darkfire Productions, and narrates several of their projects, including The Emperor’s Edge series, This Path We Share, and others. Her writing has appeared in the Erotica a la Carte podcast, a short story for The Gearheart, and an episode of the Tales from the Archives podcast (the companion to Tee Morris and Philippa Balantine’s Ministry of Peculiar Occurrences series), which garnered her a second finalist badge from the 2012 Parsec Awards. Her second novel, a Steampunk adventure entitled Master of Myth, was the first place winner in the Fantasy/Science Fiction category of The Sandy Writing Contest held annually by the Crested Butte Writers Conference. Maven is her third completed novel and the first in a planned series of four.

After completing her degree in Graphic Arts at Monterey Peninsula College, Starla opened up shop as a freelance graphic designer focusing on creating beautiful book covers for independent authors publishers. She currently lives in Virginia where she trains her three Minions and military husband.