Like nearly all humans, I have a conflicted relationship with my family. They build me up, they break me down, yadda, yadda, yadda. But in times of desperation, when reaching for truth, they come through with the giggle making.

I give to you the word for word accounting of an exchange in Facebook with my sons and siblings regarding a recent discovery. Names changed to protect my family from our own silliness.

Note: If you aren’t familiar with the Cinnamon Challenge, search it out on Youtube. I won’t link here because I will not be held responsible for copycats. Swallow at your own peril.

…That’s what she said.

Also, I’ve thrown the cinnamon away. I will not cook with something that was that close to airborne fecal contaminants.

On to the discussion surrounding this photo: 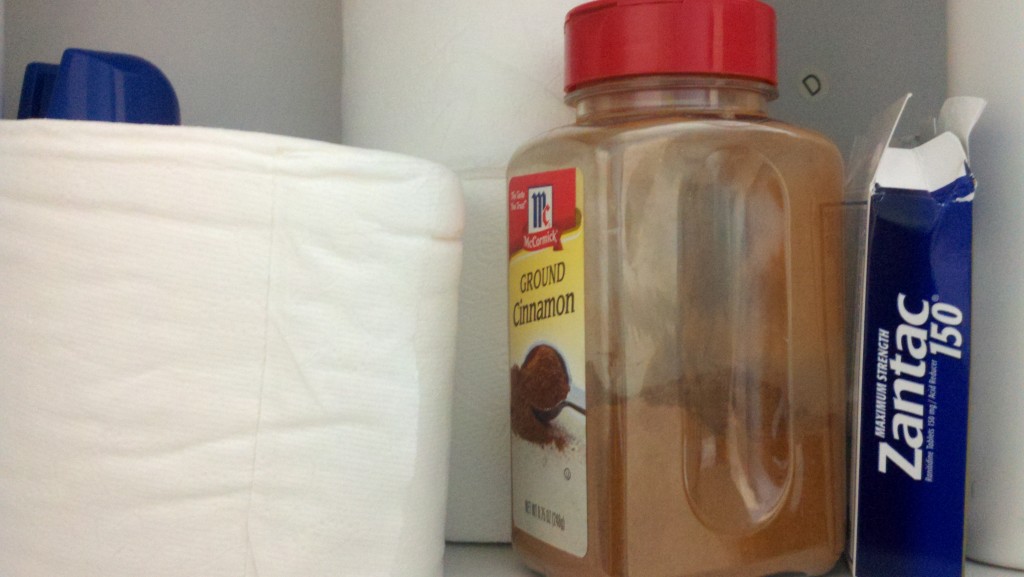 … LT has come and gone back to where he lives with his father and family out of state.

He was here almost six weeks, and it was a wonderfully harmonious time. We only raised our voices in laughter, and that was done with great frequency.

He’s over six inches taller than I, and his voice is as deep as my father’s. He hunkers down to hug me out of kindness, because he doesn’t want me to strain my back reaching up. He’s thoughtful, considerate and intuitive, which he demonstrates by putting things away and doing chores without being asked. Out of the blue he walks over to me with his arms stretched wide for a hug, and frequently says that he loves me.

In short, I wonder where my surly teen went. I think he either thinks I’m dying or he’s just become aware of how much I miss him. I suppose it’s possible he misses me, too. Nah, I won’t get my hopes up. *giggle*

We’ve not had much money for a grand and adventurous visit, but we did eke out money for an afternoon at King’s Dominion with his cousin, the Harry Potter and the Deathly Hallows Part 2 midnight show, and attendance at the Van’s Warped Tour. He spent about a week at his dad’s parent’s house, and the rest of the visit he spent with me, Naughty Bear, Chooch, other family, a friend from school and hubby’s band, Ditched by Kate. All low-key stuff, nothing crazy, but he said he had a great time.

He says he loves Kaylee and seemed a bit choked up about not having her around all the time. They are so cute together. As he was sorting through his old Legos, karate pads and old toys she was happily sitting in the corner sniffing what had to be a very stinky sock (judging by the look of it).

I decided not to get maudlin, but would instead try and better document his visit by trudging through my posts in Twitter, Facebook and Google+. No one will find these interesting but me, and my feelings won’t be hurt if you close the page now as it is quite long.

Here’s what I found, oldest to newest:

It’s taken me a long time to start to get my groove back, for a lot of different reasons.  Thanks to those that still check in here.