I have not made any New Year’s resolutions since 2008. I did not meet ANY of my goals that year. Hell, I still have one I haven’t completed, but the others I happily finished.

You are wondering how lame I am? This lame: I am making resolutions for 2012 that I will fulfill. They are all things I will do for myself, without question.

Wish me luck! These won’t be easy for me, but are things that I must do to grow as a person.

Happy New Year’s Eve Eve! Please be safe and do NOT drink and drive!

This song popped into my noggin on Monday night and has not dislodged itself yet. I’ve tried exorcising it by listening to it dozens of times and watching the video at least as many times. I’ve also tried to implant different ear-worm to no avail.

Since I’m stuck with it, you may was well be, too. It’s called “There Is A Light That Never Goes Out” and was written by Morrissey and Johnny Marr of The Smiths.

Take me out tonight
Because I want to see people
And I want to see life
Driving in your car
Oh please don’t drop me home
Because it’s not my home, it’s their home
And I’m welcome no more

As I seem to enjoy doing, I will do a series of things like this until I either forget about it or run out of them.

This was the best Christmas in a very long time, and I think the only Christmas that will top it will be when we can finally have all three of our sons together on Christmas morning. Other than that one shortcoming, I could not imagine a better day. It was pure heaven, from beginning end, in spite of some pain and anxiety.

My motivation for this post is not to describe the day in more detail or pontificate on what the true meaning of the holidays or tell you how you should have spent yours (hint: it’s different for everyone, so there is no right or wrong).

It’s gift cards. The loving and thoughtful family and friends that give gift cards to my sons that they so genuinely appreciate are a bane of my existence. The day after Christmas is spent online determining the value and then buying those same gift cards off of them so that the items they are saving up for (a set of cymbals for LT’s drum kit at a mom and pop store in his home town and the necessary bits for Naughty Bear to build his own kick-ass gaming rig from various vendors) can be achieved.

Yes, indeed. It’s possible that the gift card at Target or Best Buy or WalMart will instead get buried in the wallets of the parents of the children you bought them for, after they shell out the face value so the kids can attain their saving goals sooner.

Should I do this every year? Maybe not. But when your kids are miserly in their saving for these expensive goals and being careful with every expenditure to find their way to what their hearts desire, they can think of nothing else to spend money on and it feels almost frivolous with where their minds are to extensively search for something to spend the card on.

Please, I beg of you, on behalf of other parents that may be finding themselves in the same boat as I am again this year, find out if the kids would prefer cash towards a large purchase they are planning. Especially if they are older than 10 or 11, because they will definitely be starting to set their eyes on more and more costly items at those ages.

Yes, they may spend a small portion frivolously instead at a movie theater or buying a pair of red jeans. But it *is* the holidays and if you are giving them cash value to buy something, why not just give them cash and make it easier for them? And their parents?

Happy Holidays to all that celebrate at this time of year, and Happy Monday to those that don’t. I sincerely wish each of you Dear Readers the very best health and happiness as this year comes to a close and we await the New Year.

My husband and I recently celebrated the our 8th wedding anniversary and our 9th anniversary of our first date. At that time, I reflected on how similar and, in contrast, how different we are. Events in the last month have clarified how much I treasure him and I want to make sure I never take him for granted. Note: while I won’t be going all “Shmooopy!” I will be pontificating on how awesome my mate is. Feel free to roll your eyes and click to another page.

If you don’t already know, one of the things Chooch and I have in common is our extreme social anxiety. The difference is that mine causes me to chatter nervously and his causes him to sit back quietly until he has a level of comfort. Some people perceive me as being extroverted and outgoing and him being withdrawn. In truth, the opposite is true. He is more likely to say yes to unfamiliar social engagements with unknown people. In many cases, I would simply stay in and miss out on the fun without him to urge me out into the world. In fact, that is exactly what he had to do to get me to go to any of the first meet-ups in 2008, including Balticon.

I frequently find myself speaking for both of us in the hopes that people will recognize just how amazing he is. This is a mistake, as it makes it appear as though he is with me, not that we are together, in what we do. Regardless of how it appears, he is NOT my tag-along, just “Viv’s husband” or an accessory. He is Chooch. A singularly magnificent man.

I get really pissed when I think he is overlooked or not getting credit for all he does, for our family and for others. I am shocked that more people don’t get that he is the reason the New Media parties we hosted in 2009 and 2010 were successful, along with countless other things for which I alone have gotten most of the praise. Possibly it’s because he’s busting his ass behind the scenes while I am doing more of the dressing and food prep. Just know that without him, little of what I dream up would actually happen.

We recently rescued the ten year old dog of a family member that was no longer able to care for him. Only because my husband was willing, were we able to do the necessities that had been neglected for this loving pet (dental cleaning and removal of a diseased tooth, neutering/biopsy, analysis of a suspicious growth, vaccinations and grooming) that allowed for him to be adopted into an extremely loving family that will give him the best care and attention that could be hoped for any person, let alone animal.

Without Chooch’s generosity, this dog would have likely ended up at the shelter and after evaluation would have been put to sleep because of all his health issues. Especially with how “cage brave” (growling and barking at people) he was in his fear at what was happening. We were EXTREMELY lucky to have had the wonderful staff at the animal hospital, thanks to our future housemate, and the ability to afford to do even those basic necessities. Their kindness and love in taking care of this dog that needed so much and ensuring that he had it along with a healthy dose of love and affection is something I will never forget.

Because of this and countless other reasons, Chooch will always be the man of my dreams. A man that I was lucky enough to ensnare and trick into spending the rest of his life with me. A man that I made pinky swear on camera in front of Kaylee that he won’t die until after I do, because I love him so much that I cannot imagine life without him. She sealed the promise with a lick, by the way. Irrefutable contract in any court in the land, dontchaknow.  (Did you know I was so needy and high maintenance?)

So as the big world continues to rotate around the sun,

as people go about the hustle and bustle of their pre-holiday chaos,

I wake this morning knowing that there is one person that truly knows each and every one of my deep dark secrets, flaws and failings,

and he loves me anyways.

I am the luckiest woman I know. 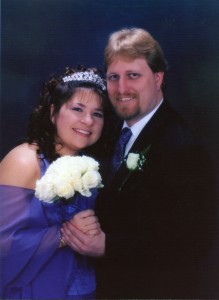