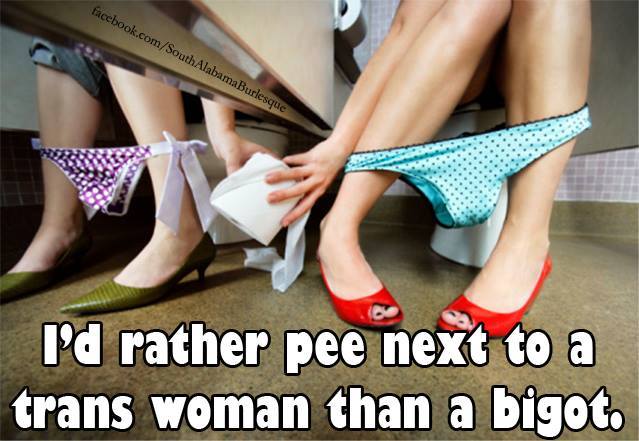 I saw this picture on Facebook and my post grew to too many words. Apparently there’s still controversy over women using the ladies room, simply because of how they obtained their feminine appearance. I had such a visceral reaction, I had to get my milk crate out to stand on. *ahem*

HELL YES to this post and here’s why:
20-ish years ago, when I was a young mother at work one day, I was using the facilities when I noticed a hand mirror under the stall wall next to me.
Confused, I then noticed the hairy knuckles and bare feet in that stall and yelled. I was still foolishly trusting in those days and couldn’t make sense of what I was seeing, so I otherwise froze not knowing what to do.

Luckily for me, when the pervert realized he was seen, he bolted instead of staying. He was probably gone before I felt safe enough to exit and run to my office to call the police, but definitely before the officers arrived. The location was a professional office building where I worked for a real estate office. Lots of foot traffic, and no one saw a shoe-less man running out of the building.

I never saw his face (or shoes!) so couldn’t pursue further. OR determine if it was a co-worker or someone else that worked in the building daily, meaning it could easily happen again.

Ever since, I’ve assumed perverted men are in stalls next to me. It’s no big deal, just take an end stall and watch the shared wall. It’s never happened since then, which I know because my residual fear means that I watch closely. IMHO, you’d have to be perverted and/or dangerous to get off by violating a woman’s privacy to such an extent, and risking arrest, just to watch her pee or poop. Just…. beyond disgusting. And I’m watching out for them.

Meanwhile, no woman has ever used the mirror peek trick.  I actually feel safer knowing there will be more women in the ladies room. It’s less of a chance for perverts to creeeeeeeeeeep around in there unnoticed.
For those worried about their kids seeing something “inappropriate” if a trans person is in the bathroom, then why do you let them go alone in alone at all?

Don’t you worry about them having an experience similar to mine, at their young ages? Regardless of whether the perpetrators are culturally permitted in the restroom, or not? Please give it some thought.
To the trans ladies, I continue to welcome you! But please let this serve as warning to you of the dangers of being in the ladies room:

Be vigilant for your privacy and safety at all times, including the bathrooms, for you are now a part of what I think of as “The Prey” gender. You will likely be targeted and victimized by some just because you are female and “up for grabs.” I’m so sorry for that, because this nation hasn’t done enough to lower the incidence of sexual assault against females.

Please, use your voice LOUDLY and don’t let anyone disrespect you. Even those with good intentions.

Namaste.
For the Dudes
For offended males that I trust:
This isn’t about you, but it’s good for you to know about. I similarly warn young females about this and about never leaving a drink unattended and watching out for each other. Consider protecting those in need.
For other males that are offended:
Welcome to reality. Suck it up and be grateful that you are a part of what I call “The Predator” gender and don’t piss me off with stupid sexual comments. Know that I give you the gift of believing YOU aren’t one, and hope that now you know what some women suffer through just to get through a day of work. For 1/4 less than you likely make, but with potential the sexual harassment gauntlet to run every day.

If you are one and know it:
GET YOURSELF HELP. You deserve a better life than the shit you are now doing, and your current/future victims deserve peace.
The emotional damage doesn’t end, and the world is hard enough to survive. Agreed?