At least, not currently. I found out after my insurance company put me in a premium bracket because they were sure I had been diagnosed with it.

After over an hour on the phone with the insurance company nurses, we were able to determine that one of the bazillion tests that were run on me must have triggered the system to spew me into the premium bracket. At the end of the call, the very sweet nurse (Jan), apologized for having to remove the extended services. I, on the other hand, thanked her for confirming that my heart’s not failing due to lack of treatment after a very scary diagnosis.

L.T., my 14 year old son, flew in yesterday from his dad’s house for his summer visit. My oldest son, Naughty Bear, offered to go with me and we also picked up my 14 year old nephew, codenamed Roboto Dude. Because of my overly excited self, NB ended up having to drive because of a migraine and mild dizziness.

A few rough patches later and my baby boy strolled off the plane with his deep voice saying “Hello, Mother.” It’s always hard to remain upright when I see my babies after such long spans, but to see my youngest biological child approach in the guise of a man-sized human? Nearly impossible to reconcile with the mental image I carry between visits.

Add to that the text messages I got from him on Saturday night, and I was completely twitterpated at his arrival. His excitement at getting here, down to knowing how many hours remained, had me over the moon. After that, a full migraine hit and NB had to drive home, as well. We met my dad for dinner to celebrate his 75th birthday and had a wonderful time. He and I were quiet at times, just watching them. I finally asked him where our babies went, as we were faced with three young men. Each one is taller than us and have deep voices and facial hair. He shrugged and looked as confused as I at the passage of time. 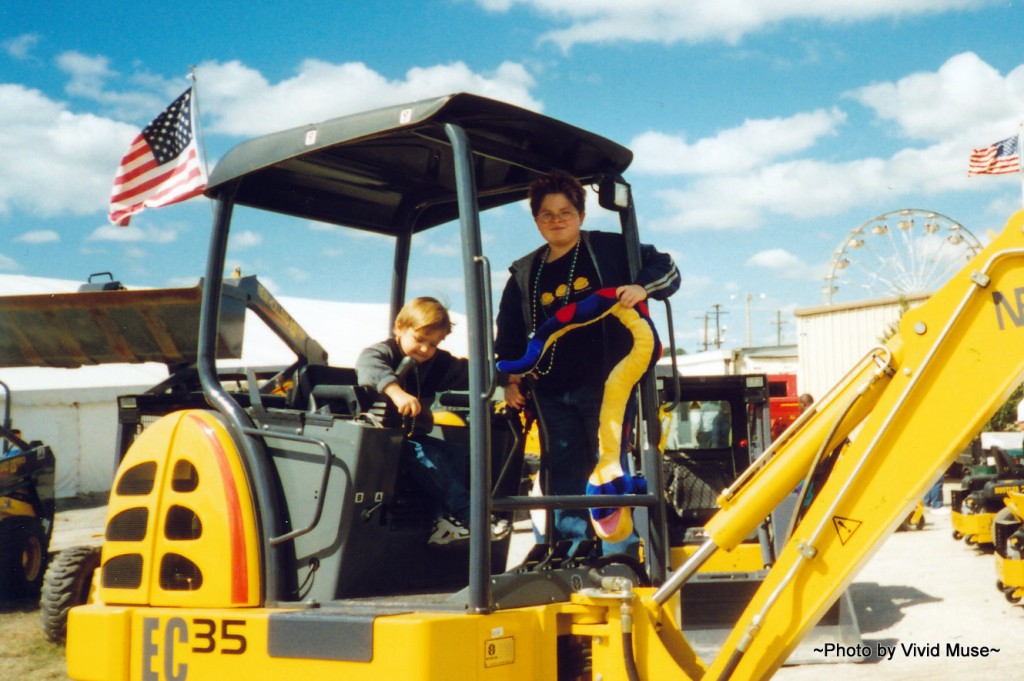 I sometimes wish that Chooch and I had a child together, and that it was a girl. It has more to do with wanting to selfishly have a tangible symbol of our love than any real desire to have another child, which is why we won’t have one. Besides, and I say this without hesitation, I never want to mess with the relationship we have with our boys. To have another child would mean we’d have to turn our eyes from the three loves of our lives. Our bonds are extremely strong, unbreakable by distance of any kind.

LT, NB and RD all want to go with me to the track for a run later today, my sons insisting that they want to lose weight. LT, already fit butwanting to get healthier said, “Who better to ask how than you?”  Instantly, the exercise rut I’ve been in since Balticon is over. Maternal need to set a good example has pushed me out of it. Today I run. With my sons.

It’s the morning I’ve been waiting all year for: my boys sleeping in after staying up all night gaming, laughing, and playing music too loud.

My 20 year old son, codename Naughty Bear, moved closer to me. He had been living with his dad’s parents about an hour away, and today moved in with my sister. I knew he was going to move there, but I thought he was waiting until the weekend. He’s now about 20 minutes away, and just dropped in with a friend of his I haven’t seen for over a year. Other than NB’s nephew, it’s one of only two friends of his that I genuinely like.

This will be a wonderful change for him, as he has felt very isolated from all of his friends while living out there. Add to that a crappy internet connection and lousy cell phone service and it’s surprising he lasted as long as he did.

For those wondering, he can’t live with us while attending college. He gets a sizable discount available only to dependents of staff members at a college that his grandfather works at. If he lives with either of his parents, he loses the discount. His grandparents have been exceeding generous to him, and for that I’m eternally grateful.

So, yeah. Pretty damned good thing that has me grinning from ear to ear on a really frustrating day.

What’s your good thing for today? Tell me in the comments!

Dragon*Con on a Disney cruise ship. That’s the best way my sleepy brain can describe it.

Friends Tee Morris, Pip Ballantine and P.G. Holyfield took over a ride to film a promo for P.G.’s upcoming book release. They didn’t tell us and used our reactions, and those of others, as part of the promo. Bastards.

Ditched by Kate played a concert in an onboard theatre. They rocked the anus off of everyone in attendance. (Don’t be scared, that’s a good thing.)

Podcasting’s Rich Sigfrit nearly shat when he met Shatner in line for some damn ride I can’t remember and Shatner knew of his impression of him. PRS doing Shatner for Shatner. That’s a lotta Shatner, yo.

We were 8 to a room (big room) instead of 4. My “Mommy Check” after everyone was packed and gone captured 2 handfuls of steampunk/gear earrings, pins, gauges, necklaces, hair clips, etc.,. (I remember sharing with my 3 permanent Con roomies, and Rich and Susan Z., but not the other 2 people.)

Daniel Dae Kim, the actor that played Jin from Lost, has a very strong accent. He pretends not to for acceptance in America. Also, he’s the utmost gentleman and saved this lady from extreme distress. I <3 him.

Natalie Portman is far more beautiful, charming and mischievous than any of us could have ever hoped and dreamed. She’s The Complete Package, if my dream is even only half right about her. *swoon*

People that usually are unkind about me behind my back were nice to my face.

People that are usually nice to me were extremely cruel, with exceptions of extreme kindness from a few beloveds.

I spent most of the time separated from Chooch because of panel schedules and social responsibilities. That is not unlike Balticon 45 ended up being.

These are only things I can remember after waking half an hour ago. I conclude by saying that we should keep Dragon*Con on dry land, in Atlanta, where it belongs. It’s just… safer that way.

I’ve been on the fence about this weekend. There is hubby’s Ditched by Kate band practice, which is non-negotiable with a hot show coming up at IOTA on Saturday, June 18th.

Then there are two book events for dear friends on Saturday and a party I truly hate to miss on Saturday night. All are in different states, naturally. Then there is the 10k that I had been training for months for on Sunday morning. And an alleged get-together with far-flung members of my Mom’s family. There has been no information on that for two months, so I’ve no idea if it’s even happening, or when.

This does not count the other things on my to-do list: the 2 month procrastinated yard sale, writing the submission guidelines for the breast cancer anthology, scrubbing the house down, continuing work on launching both a record label and publishing house, and recording and editing for our own projects and planning future projects.

So, as we’ve just decided that we cannot afford the time or funds to travel to three states in one day and I’ve re-dedicated myself to the 10k, I of course catch Chooch’s cooties. He’s on anti-biotics, with the usual catch of the doctor not being sure if it’s viral or bacterial. I loathe taking them unless they’re absolutely necessary. If and when I create a super bug capable of ending life as we know it, it will be on purpose. Still, my lung capacity will frak up my hopes of success at the 10k.

I definitely won’t be running the entire 10k, but I’m hoping to be strong enough to go anyways. Not having run for 3 weeks means my knees and shins feel entirely healed, but it’s my endurance and breathing I’m now concerned about. Luckily, there is a half-marathon at the same time, so no matter how crappy my pace, I’ve been assured by race organizers not to sweat it.

I wish we could bag it and go to our friends’ stuff instead, but sadly, I’m not coughing up gold coins to pay for the gas, food, hotel  and kennel fees. Nor has a time turner cleared my esophagus to make it possible to actually travel to all these places in a very short time. At least not yet.

I can barely make it through writing a post without losing interest in it and either saving it as a draft or outright trashing it. If I can’t stay interested enough to make it through a few readings to check for errors, how the hell can I expect you to read it?

In fact, I just closed the third post of the night because I was BORED with what I was saying.

So I’ve decided that I will try and shake off the mean reds I’ve fallen into and post a minimum of three times a week. It may be something I’ve learned, an especially enjoyable experience or just my good things for the day.

My good thing for today was laughing with my oldest son, now 20. We spent the weekend together, along with my husband, and he’s an amazing man. For his birthday, instead of video or computer games, he asked for running shoes. Instead of cheesecake, he asked for the healthiest of desserts in my baking arsenal. They grow up so fast…

As the title implies, I’m not doing a rundown of all the exquisitely awesome and awful things that happened this year. Chooch has con crud and I’m just not up to it with everything going on here.

Suffice it to say I saw many beloved friends, some old and some new, and this year’s con has had the greatest impact in my life of any I’ve attended.

I treasure all the laughter and kindnesses of friends, especially those that came to my reading. I couldn’t have made it through that without each of you there, lending me strength. I hope I did Mom proud.

If you attended and took photos, please add them to the Balticon 45 Flickr group I created. It’s a great way for folks to uncover the many photos taken, regardless of how they are tagged. If you rely solely on Facebook, I would ask you to reconsider for at least this pool of photos. Many have left FB due to privacy issues and it would be a shame for them not to see the photos you have taken and shared. You can always link to Flickr from Facebook, and you also get to see how many folks have viewed them and it allows for folks to “Favorite” them to find in the future.

The next episode of Into the Blender may include a run-down, if Chooch is in favor of it. If not, know that I tremendously enjoyed all of the events I participated in or attended.

Whether you made it to the show or not, if you want more info on Chooch’s band Ditched by Kate, you can go to their website. There will be information posted soon about how to get a physical  or digital copy of their EP, Stumble.