Chooch chose this book to share with me, as I shared the play Cyrano de Bergerac with him a few years ago. We decided back then to turn off the TV at bedtime, and we would take turns reading books to each other. For reasons that escape me, we fell out of the habit after that first book, and only recently started it again. Chooch has a great love for this book, as was evident while he read it to me. We just finished it last night and I’m grateful (while still heartbroken) that he shared it with me.

I realize this sounds extremely corny, and I can picture some that may read this are rolling their eyes now. But it is something that we look forward to every night, and it has certainly strengthened our bond. I can’t remember where he got the idea to do this, but I’m so grateful to have it as a part of our (almost) daily life now.

Ender’s Game is an utterly compelling book written by Orson Scott Card that was published in 1985. It was released in at least two other forms, including short story in 1977 and as an updated novel in 1991. There were also sequels to this tale of Ender Wiggin but having only read the 1985 version of the book, I will not address the other iterations.

This is not an easy book to read, particularly if you have male children, as the author crafts an extremely cruel “childhood” that is forced on Ender from the very beginning. There are various circumstances causing him to not have a childhood in the way that we think of it, and it is heartbreaking to witness. Not surprisingly, I thought of our three boys and this naturally made Ender’s story even more difficult to experience. We do learn that Ender has an old and wise soul. Whether it was nature or nurture that caused this is not clear to me, as his two siblings are also more mature in thought and behavior than would be normal. They are all three extraordinary in their own ways, from the very beginning of the story.

Ender and his slightly older sister Valentine are constantly terrorized by their frighteningly calm older brother Peter. He is a terrifying character, in that you can easily imagine now how someone like Jeffrey Dahlmer might have been during childhood. One of the cruelest after effects of Peter’s influence is Ender’s fear of being like him in any way. It literally haunts him for a large part of the book, as he struggles with difficult decisions.

Ender and Valentine are bonded together out of sibling love, but also as I imagine war buddies would be. Their parents are allegedly unaware as to just how dangerous Peter is and also the depths of his cruelty with his younger siblings, so do very little to protect them. Being left to fend for themselves is one of the reasons they are so close and also able to handle so many of the trials they face. This is very nearly standard in stories where extraordinary children do extraordinary things.

The fact that Ender and Valentine are so lovingly devoted to each other is the single most beautiful aspect of the book, and one that makes it worth reading as Ender leaves his traumatic childhood to enter another terribly cruel existence. And as a silly aside, as Valentine’s character in the book developed, I stated how gratified I was that our pup Kaylee has “Valentine” as part of her name. While it was for a different reason, I love the fact that this other Valentine is out there, even if only in a fictional sense.

The author deftly created a vision of the worlds and experiences in Ender’s world, to the point that I actually shed tears very early in the story, and if memory serves it was even in the first chapter. I find it amazing that you are made to care so much for he and Valentine almost instantaneously. His use of imagery was right on target as well, as I could easily picture the battle room and Ender’s unusual experiences after he was sent up to the school.

There is a very rich and well detailed story here of how Ender, being determined to be one of the most gifted children in the world, is sent to a school to train with other similarly gifted children. This was deemed necessary as their world was seeking what would be equated to the savior of the human race. Twice before, Earth had been attacked by an alien race called “Buggers” and it was anticipated that another war would take place soon. An elaborate testing and training system was developed, to ensure that the children matured and trained quickly to protect the human race from extinction. There is a lot more to this, but I leave it to you to discover if you haven’t already read the book.

I highly recommend Ender’s Game whether you enjoy this genre or not. I hate to only categorize it as Sci Fi, because there is so much beyond that going on here. If you have already read it, in any of its forms, I’d love for you to share your thoughts via comments.

I’m using some of my migraine-free time to try and get us better organized, with the hopeful result being that I will be far more productive. We’ve had a lot of changes in the last year, and I’ve not kept up. While digging out from all the paper on/around/under/stuffed in/ flying around my desk, I’ve had hideous task after painful issue to clean up and deal with. Some nasty demons, and some really big disappointments in the last few days.

I had just tweeted in commiseration with my friend Jett a wish for this day to be over, as it has not been pleasant by any stretch of the imagination.  Within two hours I found a note I had written to myself sometime last year.

I was thoroughly puzzled for a moment, until I remembered a hectic day at work last year when I reached for the phone and accidentally dialed my deceased Mother’s cell phone while calling my sister’s cell. It’s happened a few times, as the numbers are identical except for the last digit being one higher. I usually curse and hang up before anyone picks up, and then lick my wounds of missing her. This time I didn’t realize I had done it until a recording played, but I grabbed a pen and wrote down the message so I wouldn’t forget it. 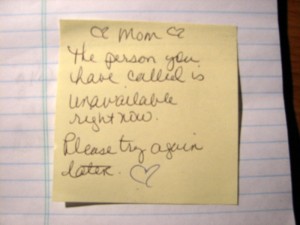 I’m grinning ear to ear with teary eyes, like an idiot, because this is how little it takes to make me feel like she’s still a part of my life. I’m stunned every day when I realize that my world hasn’t collapsed without her huge presence, and am never happier when the Universe brings me a smile because of her. Being reminded that, as I believe, I will feel her arms around me and hear her infectious laughter again some day is a tremendous joy on a great day, let alone a not-so-great one.

So, I’m reverting back to my old saying of “It’s Not A Bad Day Until You Proclaim It To Be One”, and never having another bad day again. Because you never know when something wonderful will happen, small as it may be, to put joy in your heart.