Saturday was a rarity for us. Although we know lots of people with short ones, spending an entire day with babies is not a common occurrence for us. We spent the afternoon at a birthday party for the two year old daughter of dear friends, and there were two other adorable wee ones in attendance. Watching them laugh, play, fuss, fight over toys and then laugh again is something that will lift 20 years from your age as you giggle at their antics and try to keep up. 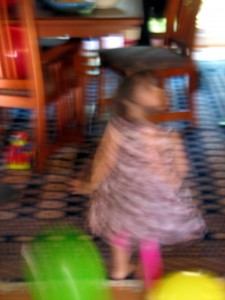 In the evening, we were with two other adorable babes as they grinned, giggled and danced the night away.Wave after wave of miniature cuteness from the day carried me away to the point that I looked at Chooch and said, “Really? We’re done having kids?” He gave me a suspicious look as he said, with much finality, “Yes.”

I was as surprised as he was at my question, but the feeling passed as I reminded myself that we made that decision long ago in the hopes of better providing for the children we already have from previous marriages. It was the right decision, especially with the weird medical stuff we’re going through right now and the added difficulty of having our three boys all living so far from us. I’m sure that my constant missing of them contributed to my brief baby craving, and no matter how much time I spend with other people’s kids, it just doesn’t soothe that longing. If anything it makes it more poignant.

No whining – this is my life and I’ve got much to be thankful for, including the health and happiness of the three magnificent young men in my life and heart. Everything else is gravy.

Besides, I’ll be a grandmother someday. Then I’ll be free to purely spoil, rather than parent, the sweet wee ones. That certainly seems like something that is worth waiting for.

I know this is from way out in left field, but have you and Chooch ever thought about being foster parents? Now that the boys are living elsewhere and you are home during the day it might be something that would put your talents to use. You are a Mother, a very nurturing personality and I just got struck with the idea of how great it might be for a kid who needs a temporary home to have someone like you provide that for them?

When fostering you get paid for the expenses by CPS and medical and other things are covered so all you have to spend is love.

I do warn though, it is a hard process and when you foster with the idea of not adopting it means you have to say goodbye to the kids and let them go. Be it back to their families (either back to the parents they were taken from who got help, or off to extended family) or to families who will permanently adopt them.

When I was young my family took in two kids, siblings. My parents only intended on taking one foster kid at a time but the brother had a sister and they had been split up. The brother came first and he had been kicked from 5 homes before coming to us (he liked to test the waters to see how far he would go before getting kicked out) and when they agency saw how well we did with him they thought it would be good to bring his sister to living with him. Their mother was pregnant with a third child and as soon as she was born she went to another family who planned on adopting her. We had the siblings for around three years. I know that they are better off for having been with us. They never went back to their mother, she couldn’t ever get her act together, but they ended up getting adopted together. Without our placement they would have been apart forever. My mother counldn’t adopt them, she knew impending divorce was around the corner and that wouldn’t be fair to them. The sister had some problems that would need more attention then a family of 9 going through divorce could offer and the coming years for her would be important. We recently got contact with them again and found out that they grew up to be great people. The brother was in college (when he was with us he went from getting left back in school and being seen as someone who would drop out or be arrested before reaching 15 which is sad considering he was only in grade school, to being a normal kid who can pay attention in class, follow the rules and had a good school ethic) and doing very well socially. The sister had her problems but was able to stay in public school, not go to a special school or more severe as feared and was expected to graduate with a special education degree and was even holding down a job. Amazing considering the evaluations of these kids when we got them. I know it helped them to be with us, though I won’t lie, I miss them every day.

Fostering kids is a great thing someone who is meant to nurture can do, but it is hard on the heart. Just a thought and like I said it might be completely out there.

As I write this, I feel like I am convincing myself of a future path for me… I want kids someday but I do know the risk of not being able to have them the older I get. I wonder if other then adoption this might be something I do…

It’s a wonderful idea, and one that I’ve toyed with for two decades. I’m not physically in the position to do it at this point, but even when that wasn’t the case I’m pretty sure I’d be devastated when the child moved on, even knowing all along that it was coming. I’m finding it pretty tough to handle when the kids move on.

I’m just so absolutely honored at your suggestion and the thought that I could do it well, thank you! It certainly sounds like something that would fit for you, especially knowing what all it entails by your family having helped kids through terrible situations. They sound like spectacular people, obviously helped along their path by your loving family in immeasurable ways. And don’t give up on having kids yet, darlin’. A high school friend, also 41, just celebrated her son’s third birthday. He’s healthy, happy and adored. You’ve got plenty of time still, if that’s what you choose.

And feel free to ramble anytime! It’s one of my very favorite things!