For some reason, the potential impact of a concert-triggered migraine didn’t really occur to me until I was mired spinny and owie in a doozy at the They Might Be Giants concert earlier this year. While I was fine and happier than a newb geek has any right to be during Jonathan Coulton’s opening set, the much higher volume and lights sent me running from the venue for relief during TMBG. The horns certainly didn’t help. I was really bummed, since it was my first time actually making it to one of their shows and also because we were with friends Pat and Lisa, who we rarely get to spend time with.

Since then, I’ve been afraid to buy tickets to any shows. My recent heartbreak was newly found Metric playing in Richmond last month. My Scott Pilgrim Fangirl heart was broken at missing them (Their “Black Sheep” was performed by The Clash at Demonhead in the flick. Easily my fave song on the soundtrack.), but we couldn’t justify springing the dough for a show I might have to bail on.

My new heartbreak is the Linkin Park show in February. Their Hybrid Theory album literally catapulted me singing and screaming through a lot of rage and heartbreak at a dark time in my life. That album unsurprisingly resides on my “Perfect Album” list and I’ll always have a soft spot for them, regardless of what I think of their recent releases.  The Projekt Revolution concert I went to in Fairfax, VA was a high-energy, face-twisting, lustful-singing-at-the-top-of-your-lungs show and I loved fangirling after the show when I met them. Yes, I told Mike Shinoda what the album meant to me and how it helped me in a wrenchingly cathartic way.

Not surprisingly, I’ve also had to show restraint with movies although it’s only been recent ones that have really triggered the symptoms in any notable way.

After viewing Scott Pilgrim vs. The World three times in the theater and once at home, I’ve yet to see the ending boss fight. The visual effects drive a spike through my brain and I have to close my eyes and cover them to negate them. Bummer, but not unexpected. Video games have reportedly caused seizures in people before, and the movie is pretty heavy with video game effects. I was disappointed that I was unable to view it at home, as I was sure that the smaller screen would help. I was wrong. 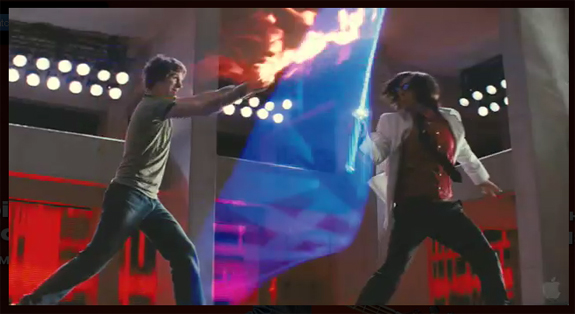 Seeing Harry Potter and the Deathly Hallows on the big screen last week hit me harder than I anticipated. It’s possible that the long day played a part in this, however. I was up at 6 a.m. and we went to the midnight-oh-one showing. There were a few scenes that were particularly harsh,  the one where Harry departs Privet drive, one with Hermione and a snatcher in the woods, the battle in the Ministry and the ending battle.  I was quite loopy after the end and needed to remain seated for a bit, and kindly Jett offered me her arm as we exited for stability.

I’ve already reduced my video game time, especially those that have a 3D effect. There have also been nights were I’ve had to log off of Lord of the Rings Online because of dizziness when navigating the Misty Mountain trails, among other things. But these don’t surprise me as much as concerts or movies since they are far more immersive.

I now have to stop and make a concerted effort to evaluate the possible effects, and even carry ear plugs with me, as I did the night of the Geek Radio Daily Pub Crawl and Chooch’s band practice the other night.  Although so far it’s only been the visual inputs that trigger dizziness, both the visual and the audio can trigger the migraines.

Talk about a buzz kill.