Three days ago, I was at a Super Target helping a magnificent woman herd two young children as we shopped for my husband’s birthday party. The spins and brain fog had me in their grip and I was feeling more like a hindrance than a help. While taking a snack break during our wait for reinforcements of the fatherly persuasion in the store cafe, I made a break for a tinkle and a quiet moment. No matter how well behaved and beautiful children are, they just flat-out exhaust me in the most delightful way. (My jaws were sore from laughing and smiling so much at their antics!)

While making like Tinkle Bell, I noticed the style of shoes under the next stall. I wondered what the rest of her looked like, and imagined her to be someone that had an appearance that would make others turn away. Having been a gal that dressed… strangely… in my teens, I remembered the looks of disgust and eye rolling that would occur. People would assume I was a juvenile delinquent and possibly even a drug addict just because my blue black hair shot out in an unnatural way and my pale white skin, black painted eyes and bright red lips and streaked hair looked different from the way the 80’s pop culture dictated. Throw on vintage clothing and jewelry, rhinestone dog collars and my little sister’s toys strung as earrings and it was an interesting look.

In my small Texas town, my friends and I were definitely looked upon as if we weren’t normal, but rather some sort of mutant. We were gleeful, as it meant we didn’t fit in with the cowboy hat/giant beltbuckled or bleached/permed/tanned.  I’m hopeful that it’s more acceptable now, with stores like Hot Topic making it so much easier to attain the mass produced items, and people dressed in this way are certainly more prevalent.

But people may still be asking, as they did in when I was doing it, “Why would someone go to such lengths to make themselves look unattractive (by society’s standards)?” Speaking for myself, that’s a long story and would rely on introspection and speculation on someone that I no longer am, so I won’t bore you (or me) with that.

I will reveal that my friends and I laughed at the derision from those that worked extremely hard to make themselves attractive to everyone, thus turning into carbon copies of each other. As they did, we took great pride in how we looked, but still, hello hypocrisy! We were judging them for looking normal just as they were judging us for looking different.

Still in the stall, I grabbed my camera phone, made sure it was silent and took this photo to document that, no matter how someone dresses or how different or bad-ass they may appear, they are human. We’re all here, sharing this space and going about our lives. We do the best we can as we deal with emotional, physical, psychological and  biological needs.

So the next time you feel like mocking someone for dressing differently, being too tall, being too fat, or holding different beliefs or values than you, just remember there’s a real person in there. And probably a really magnificent one, if given half the chance. After all, everybody tinkles. 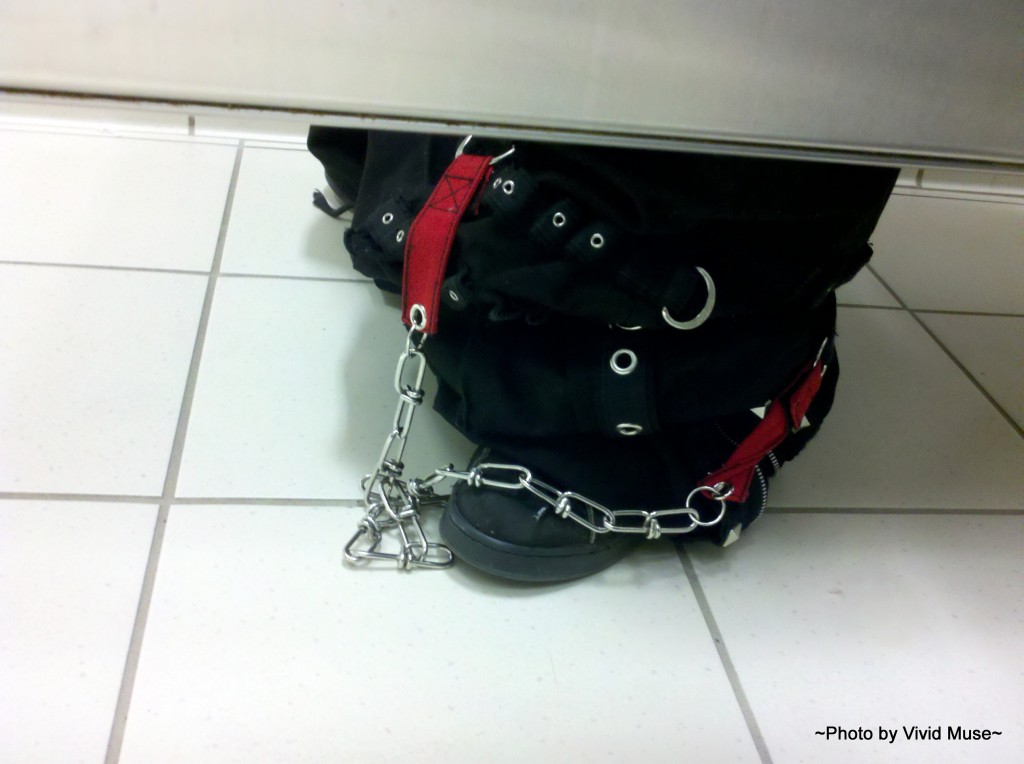 Edit: I actually took this photo a few weeks ago with my camera phone, but it sat forgotten until today. I giggled at my forgetfulness, because when I was in the environment that allowed the shot I was immediately struck by  a NEED to behave crassly and take the photo. Meeting at the sinks after our business was finished, she was a woman, and we discussed her love of Gir and Invader Zim, as evidenced by her t-shirt, hoodie and messenger bag. My kinda gal, to be sure.

Giggling at your description of the way you used to dress. Imagination FTW…

Nobilis, I just may have to see if I can find some old photos to post. It won’t be anytime soon with the current projects, but if I come across any I’ll add them. Pretty unimpressive by today’s standards, I’m sure. I relied on vintage stores and under-appreciated color selections at retail stores. Nothing like the selection available these days!

Thanks for the good reminder, Viv.

Zach, I made it myself!