Overture and opening credits: You definitely get that they were trying to imbue a sense of grandeur and majesty, which usually makes me roll my eyes. Because I know the reputation of this movie, it’s probably well-deserved, so I only half-rolled my eyes.

In this film, Spartacus is a slave and is openly rebellious, as he demonstrates by hamstringing a guard that’s beating him by cutting into the tendon with his teeth. That my friends, is what you call A Bad Ass. He’s sold to a gladiator school for training, with the intent of selling him to win or die in the arena.

He develops friendships (or tries) to, and because of his success is given a female slave to enjoy. He is struck by her beauty and fragility and gently touches her skin and hair, admitting he’d never had a woman before. He’s incredibly smitten and she appears confused at what I’m sure is a completely different meeting than she usually gets.

They are then mocked by voyeur Batiatus which enrages Spartacus, causing him to shout, “I’m not an animal!”

“Neither am I,” Varinia says quietly. This is the first hint that although she is submissive, Spartacus isn’t the only one with some rebellion in him.

The training montage was more interesting than most. How do you train men to fight to the death when you only care a little if they live or die? You have them on a training machine with huge swords attached to give greater motivation to doing well, I suppose.

Burgeoning love growing between Varinia and Spartacus is believable and touching, and how I imagine it may have been a common development in the slave communities throughout history.

As two sets of gladiators at the school are forced to fight to the death, the guard says to those in the spectator box, “Those who are about to die salute you.” I thought I misheard until I saw it repeated with the second set of gladiators.

During that fight, Draba refused to kill Spartacus and instead attacked the spectators. This was quite surprising since he had refused to exchange names or befriend the other gladiators-in-training  since they would likely face each other in battle one day. The implication was that he would kill anyone he was put in the arena with, and did not want to make friends with any of them. In hindsight, it seems that Draba was trying to steel himself to be able to kill another in battle so tried to keep a distance, which he was unable to do.

The honorable Draba’s body was hung as an example to the others, “He’ll hang there til he rots” said the head guard and all-around meanie. All the slaves hung their heads as they passed by, but this instead seemed to  haunt and motivate Spartacus, and ended up being a big fat mistake on Batiatus’ part.

Evil politician Crassus said to Antonius as he was washing his back in the giant tub, “My taste includes both snails and oysters.” Because of the conversation surrounding that statement, this was only a veiled reference since it was literally spoken behind a veil. Crassus seemed very disappointed when Antonius took that moment to escape.Confession time:
Notes were abandoned after this as I became completely caught up in the movie. Yes, this movie. I’ve dodged it for decades, and it is magnificent. Here are my thoughts after watching:

The complete and utter love and devotion that Spartacus inspired was compelling and well-deserved.

The moment when he kills Antoninus (Tony Curtis) is particularly poignant as they are forced to fight to the death knowing that that victor will be crucified. They fiercely battle to kill the other, only because each wants to save the other from the agony of dying slowly in the heat without food or water while nailed to a cross. Spartacus wins, and you can see it takes all that is left of him as he believes all the people he loves to be dead.

Happily, in a traumatizing and devastatingly bittersweet turn, in the very last scene he sees his wife Varinia after she is freed with their son. She introduces him, and then begs him to let himself die. *ouch*

I remain glad that I avoided this movie until now, as I don’t know that I would have given it as much attention were I not convalescing from the wonderful weekend. All of the performances were perfection, I don’t have a criticism about any point in this movie.

It should also be noted that Kirk Douglas’ physique is insanely ripped in this movie. Insane!

My favorite thing about this movie is having discovered Jean Simmons. In the moment when she was reunited with Spartacus after separately freeing themselves, I found her to be exquisitely joyful and captivating. Her performance was perfection, and I am now picking through her movies and adding them to my Netflix queue. The list is long, and includes How to Make An American Quilt; Guys and Dolls with Brando and Sinatra; Hamlet, when she once again teamed with Olivier; and many other movies which landed her alongside Gregory Peck, Burt Lancaster and Cary Grant.

More recently, she was on an episode of Star Trek: The Next Generation and did voice work for  Thru the Moebius Strip, (Shepway), Howl’s Moving Castle (Grandma Sophie in the English version), and Final Fantasy: The Spirits Within (Council Member #2).

I couldn’t find a photo of her from Spartacus, but have included this one from 1959. 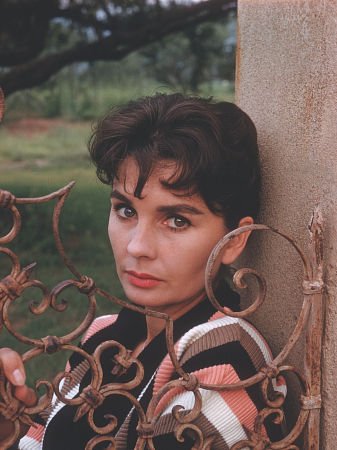 She had the kind of dark-haired ethereal beauty that I find similar to Audrey Hepburn, with a sprinkle of Vivian Leigh.
Shame on me for not having discovered her sooner. She was so very talented!

Next on the AFI list: The Apartment, also from 1960. I have faint recollections of this one, starring Jack Lemmon and Shirley MacLaine, so am guessing I saw all or most of it at some point.