There was supposed to be a vow renewal ceremony with our full family and closest friends. Then the guy that we long planned to officiate moved on to greater adventures, beyond this world.

Still, I really wish you were here, P.G. I know any words you’d haven given us would have been perfectly grumpy. And perfectly wonderful.

We figure he’d approve of our revised plan – saving vow renewal ceremony/reception money to spend instead on a spontaneous, bonding-heavy, anything goes vacation with our kids and family. We did that a few weeks ago, and I lost yet another wedding bond.

I have been using cheap fake wedding rings for years, since I lost my engagement ring. Big, chunky and silly, but very clearly representative of being married. The real deal is locked up. Fibromyalgia “fog” and medications to fight pain make my memory horrible. No matter how crucial the memory, I have no power over whether I retain it or not. It’s truly crushing sometimes.

So FINALLY, before this big hop from the Blue Ridge Mountains to the Sandia Mountains, we’ve ensured that I can’t lose my wedding ring again. The original will stay locked up and safe for the duration of the move. It’s perfect.

The design we settled on is a “rupee” (gem) found in the Nintendo game, Legend of Zelda. It’s outline-only, in dark purple. (Purple is my favorite color, and my skin grabs it nicely.) Plus, dodging black for now gives me more options later.
No, Chooch did not get one because he’s our financial provider and who knows when employers that can’t see beyond the exterior may come in to play?
But he designed it along with me, just like our original wedding rings. #DayJobSecurityFTW #FamilyLife #FamilyLove
Now, because it’s a finger tattoo, it will blur and muddy over time more than other tattoos, as is often reported. Since that news, it’s taken us years to decide on the design, deciding to embrace that imperfections inherent, rather than abandon it something we love.
With this in mind, wanting more than just the rupee itself, there are little dots and bigger dots making up a disconnected “band” below the stone.
Happily, over the years together, we’ll get to watch as the natural process of aging blurs the series of dots into a strong, solid yet imperfect band. The longer we live, the stronger our bond and our band, as has happened all this time.
#ArmouringUp#EndingThisEra #StartingANewOne #Finally 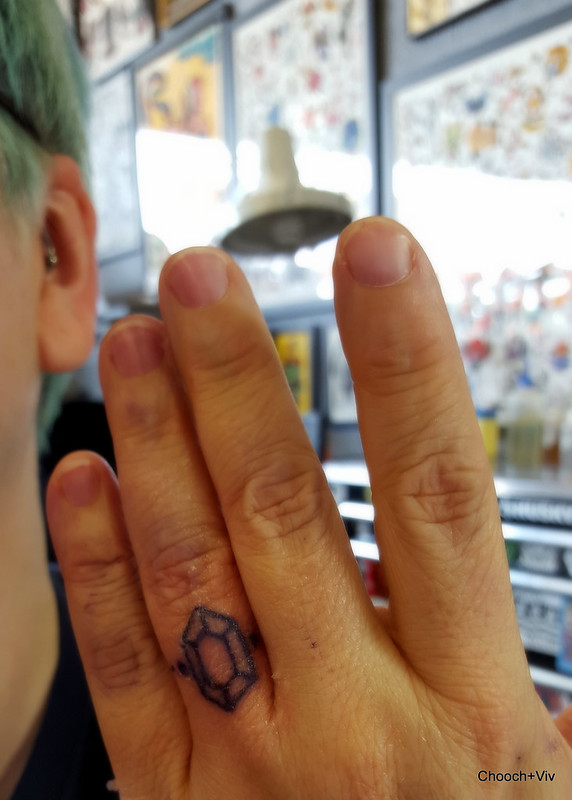 Approximately two years ago, Chooch and I invited my family over for dinner and a movie. The impetus for this was that no one in my local family of 11 (at that time) had seen Firefly or Serenity. The shame I felt was immense, so we went about correcting that. Each one of them loved the movie, but I was unable to get anyone to commit to a viewing of Firefly, either in marathon or across multiple nights. Still, progress.

Once again, Chooch and I are having dinner and a movie for the fam. Some have moved away, so the count is lower.  But, having discovered how cool he is in the last few months, we are including my BET (Bro’s Ex’s Twin).  Our count is 8, possibly 9 if BET brings his son.

If you’ve seen the movie, then you’ll appreciate that I’m serving garlic bread and chicken parmesan. In lieu of the gelato, I’m serving turtle pecan cheesecake as a belated birthday cake for my Baby Sis. I may yet pick up some gelato as I’ve always wanted to try it and it certainly seems like the right night.

I fell in love this movie, from the first second of the Universal logo. I didn’t understand the hub-bub around it, but was happy to see it with Chooch and the visiting P.G. Holyfield. I literally had to use all my willpower not to dance on the seats in the theater. The music, cinematography, editing, acting and every other aspect of this movie made me swoon and giggle at the same time. I have been absolutely joyful upon all three viewings in the movie theaters at its utter perfection. It’s not an exaggeration when I say that, for me, this movie was game changing. I love it deeply and fiercely, but will try not to judge you if you don’t. No promises.

I could gush for a few thousand words on why, but I won’t bore you with that. Instead, I’ll give you a quote from a recent chat between director Edgar Wright and Guillermo Del Toro. At the end of the article, Guillermo says something similar to what I’ve been saying since it came out in August:

“To me, [this] is a really important screening because I think we all can go out to the world after this screening and tell every motherfucker out there to watch the movie,” said Del Toro. “Why? Because anyone that didn’t watch it is a motherfucker. We can tell them when they ask why does Hollywood make such shitty movies because when they do great ones, you don’t fucking show up.”

As I posted previously, my Playstation Network account was hacked in the wee hours of Saturday morning. Because my credit card info was unintentionally linked, they were able to not only empty the $10 or so that remained after previous purchases but were also able to steal $140 from my bank account to load the account with before emptying it out with purchases.

The customer support was great, as they created a service request and walked me through changing my password after 2 escalations. Due to it being a Saturday, they were unable to reimburse the bank transaction and I was given a service number and told to call back on Monday. In speaking to an extremely helpful gentleman yesterday, I am very happy with the customer service I’ve received as a result of the early morning drama.

Not only is my bank account getting credited, but they were easily able to trace the consoles involved. In seconds, Paul was able to see that our console was not used to load the PSN wallet or download any games, so he continued the investigation to track down the console that hacked my account.

It seems that one PSP was used to load the PSN wallet with funds from my bank account, and that multiple PSP’s then used my account info to download games. Not surprisingly, this was identified in moments, down to the serial numbers of the PSP’s. All those involved have been permanently banned from the PSNetwork.

Odd as it may sound, I find this swift shot of justice more enjoyable than the recovery of my funds. In a world where people routinely do harm to people just trying to get by in this difficult life, I have no problem when justice (or karma) gives them a swift knee to the groin.

So, to prove that you’re smarter than me by not becoming a victim:

My last remaining hope? That they were PSP Go’s. They only way that content can be loaded onto those little darlings is via the PSN Store, which they are now banned from accessing. Now that would be heavenly.

Neither Chooch or I follow any sports, so the Superbowl has been something we’ve only observed for others. If either of the sons that lived with us was interested, or if we were invited to a party we would certainly watch but not when left to our own devices. Since it’s just the two of us today, we followed our usual protocol of recording it to skip through and watch the commercials and half-time performances and found other things to enjoy.

Chooch walked over to the store to get nacho fixin’s, and that’s all we ended up having for dinner. We settled in and watched Team America: World Police which we had neglected viewing previously. Needless to say, we found it very entertaining even though we were grossed out by the sex scene. Yes, we had been warned, but … wow. I had no idea puppets could do that!

Afterwards, the chocolate cake I was craving and baked was finished and we ate some of that. I’ve been dieting and am ramping up big time tomorrow and so this was kind of my ‘last meal’ of sorts to purge the cravings that have been haunting me. Mission accomplished *burp*

Chooch then headed upstairs to work on a video of Kaylee’s snowy adventures this weekend while I played some PS3 demos I’ve been wanting to try. I gave Peggle and Critter Crunch another try, but for mindless quick games I don’t know that I’ll get any further enjoyment outside of replaying the demos. Critter Crunch is more likely one I would get, simply because I can’t seem to get past that BLASTED level 5! Peggle is too easy, so no point in buying that.

A new game I tried was Bayonetta, and it was the graphics that really sucked me in. I usually prefer puzzle vs. fight games, but this one is really gorgeous. I greatly enjoyed the demo, in spite of the mildly graphic violence simply because the action moves so quickly it’s not gory to me. The most irritating thing for me was trying to ignore the catwalk strut she has. But her shoes, OMG, her shoes! WANT!!! Flashes of nudity as her clothing/hair unwind to do massive damage, but in the demo there was nothing you wouldn’t see on 10pm TV dramas. This may go on my wishlist, but I’m weighing it carefully since I already have so many things to distract me from projects around the house.

My least favorite moments of Superbowl Sunday? Sending a necessary but unpleasant email that would place complications on a friend, and later washing all the filters on my vacuum cleaner. Total frustration at my circumstances on the first, and a major gross-out on the second.

My favorite moments of Superbowl Sunday? A (too brief) visit with Man-Child, and later finding out that OPM already determined that the DC area offices will remain closed tomorrow. Another day with hubby, huzzah! Now we can brace for the snow storm that is currently predicted for Tuesday.  Shoveling is great exercise, at least.