So, I’m having fun playing with desserts. I’m finding that people love when I show up with some tasty new variation on an old dessert, but are also happy when I leave and make me take it with me. Conversely, I’m trying to leave the sweet temptations behind and they frequently end up in the garbage. I have no problems with this, as I’d rather it go to the landfill then attach to my ass.

Besides playing with variations of cheesecake flavors and cake frostings, I’ve been attempting to bake vegan and also more things from scratch, I became fascinated with the Cherpumple phenomenon which resulted in customized Pi-Cakes. I fell in love with friend Andrea’s Dessert Enchiladas to the point that if her husband doesn’t treat her right I’m ready to propose on the spot.

The newest thing I’ve been working on is for my dear friend Jett Micheyl’s birthday. A month ago, she tweeted this:

@MistressJett
I want this cake for my birthday -> http://trunc.it/dy7lw
21 Jan via tGadget
The link went to this insane creation: 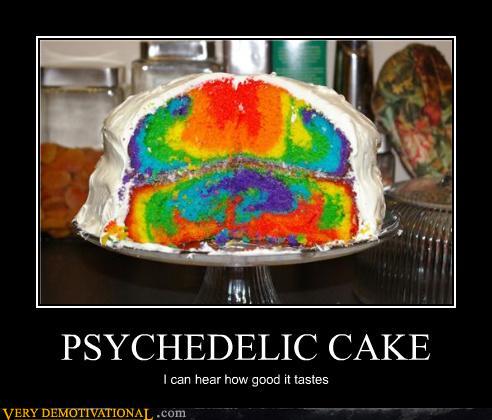 And so began the testing…
Last weekend I did two test cakes, because I wanted to test my procedure and also decide which cake mix to go with. Yes, I cheated and used cake mix. There were already too many variables in play, and I wanted to ensure that the cake would actually taste GOOD.

For the test, I tried a white cake mix and a yellow cake mix, since I found conflicting information on the internet on which provided a better looking end result. I also used a different technique in that for the white cake mix I evenly divided the batter across the six glasses, and with the yellow cake mix I used a graduated amount for each color. Red being the outside color needed more batter, violet being the inside color needed less batter. I varied the amounts based on location in the classic “ROY G. BIV” rainbow order between red and violet.

It’s pretty easy to tell that the white cake mix created more pastel colors, which were beautiful. But Jett is more vibrant than that, so I went with the yellow cake mix base and got much brighter colors. The trick will be getting the violet without making it quite so dark. I also preferred the result with the graduated amounts so decided it was worth the extra trouble. The flavor was remarkably similar, with the white being MUCH drier than the yellow. We decided yellow was the way to go for both vibrancy and moistness.

These photos are from the tests I did, using 1 box of cake mix in each 10″ cake pan. I intended that solely for the test, but decide to go ahead with the size for the final cake.

Check this space tomorrow for the final cake results.

That looks so tastey! Feel like sending me one. Birthday is tomorrow!.

I’ll send you a virtual piece of my canoli cake!